Get Kraken is a tale of high adventure; there are poachers, plucky heroes, ice-cold villains, breath-taking battles and a sea monster bigger than your imagination. All brought to larger-than-life by four actors. No fancy props or cd players making sound effects. Four sweaty actors take the audience under the ocean on the hunt for the greatest catch of all… the KRAKEN!

Background to the play:
I wrote Get Kraken as part of ASSITEJ SA and The Theatre Arts Admin Collective’s Inspiring a Generation programme, a combination of a mentorship and cultural exchange which I have posted about a couple of times before (Inspiring a Generation, No Really). It’s being performed at various schools around the Cape even gone as far a field as the Garden Route Family Festival in Plett and Knysna. Right now we have one week left at the Intimate Theatre (16th April – 4th May), and it’ll be heading to the National Arts Festival in Grahamstown in June / July as part of the ASSITEJ family venue.

What sets the play apart from most other family fare is the way Kim Kerfoot and the performers create the world of the story. It’s done in the style of a theatrical comic book without props, set, or costume – the actors, dressed in black t-shirts and pants, use their bodies and voices to zoom in and out, to create special effects and locations from a busy road, the ocean by night, to a submarine or the inside of a whale. Part of going to schools has been giving workshops on this energetic style of performance. The script is also going to form part Shuter & Shooter’s grade 9 English reader next year, an added bonus for schools. 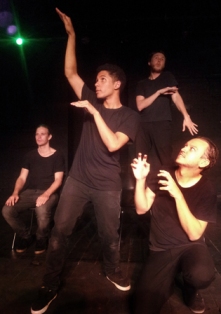 “Director Kim Kerfoot brings Jon Keevy’s text to life in ways that keep the audience guessing and in stitches. As something of an environmentalist, for me it’s the reasoning behind hunting the Kraken that make this wildly entertaining play stand out among the current theatre on offer in Cape Town.”

“Jon Keevy has written a fun and funny script and Kim Kerfoot has directed the cast with vigour and cleverness. I loved it.”

“Under Kim Kerfoot’s direction this cast bravely goes into a totally different direction to most of what passes for children’s theatre in Cape Town. Instead of sticking to staid, safe fairy tales with bright primary colours and seriously old ways of looking at the world, Get Kraken is a comic-book adventure with references from the now and speech patterns borrowed from TV and film.”

“I couldn’t stop laughing. All you need is your imagination and you’ll be set for one seriously funny night!”

“The comedic appeal and brilliance of the artists is apparent from the moment they set foot on stage, but it is their imagination that particularly shines in this production. The cast merges vivid miming and idiosyncratic sound effects to create a theatrical tale for the hunt of “Kraken”.  This show without a doubt raises the bar for experimental stage comedy.”

“Keevy has managed to write a script for children which is as entertaining for adults and it is presented in an innovative way – light on embellishment and laden with energy.”

The Get Kraken team:

This site uses Akismet to reduce spam. Learn how your comment data is processed.

What I’m thing about